I’ve finished Malware. Final edits done. Conversion to EPUB format went surprisingly well. Not looking forward to Smashwords, though. Maybe things have gotten better in the years since I last used it?

The only thing really holding publication up is cover art. My usual artist stopped taking commissions, so I’m at a loss there. I’d really like to get some nice art, and I’m personally hopeless on that front.

Still, maybe I can get this out before the 2020 election?

Malware is now out to my beta readers. I expect to have their feedback by late January / early February, at which point I’ll work on incorporating that feedback. Then, and only then, will the arduous task of preparing it for publication take place. Speaking of which, I should ping my artist-of-choice and see if she’s still accepting commissions…

Every once in a while someone surprises me by checking out this section. Given that that last time I updated it was in 2012, it would behoove me to keep it a bit more current. Here’s the latest news pertaining to the Marlowe-verse:

Luck Be A Spacelady, sequel to Balloons of the Apocalypse, has been sitting in a plot outline 100% done / book 2/3rds written rough draft state for several years. I recently did a read-through and didn’t hate what I read, so I’m slightly more motivated to getting around to finishing it. But it’s still a ways off.

Malware, a short story involving Marlowe, Nina, and some very nice repair weevils, is currently in a completed first draft state. The biggest holdup to getting it released is I need to go through it and remove all instances of the Oxford comma. I’d originally hoped to have it out in time for the 2018 election cycle, but I’m so depressed about the state of American politics at this point that I very much doubt I’ll muster the will to meet that deadline. That said, this is something that I expect to get out within the next six months (famous last words…).

And now back to your original, out-of-date programming.

Marlowe and the Spacewoman is a semi-finalist in the Scifi/Fantasy category of The Kindle Book Review‘s 2012 The Best Book contest! I get a cool semifinalist badge.

Finalists were announced September 1st, 2012. Marlowe and Nina were not invited to the follow-up party. But hey, the sequel, Balloons of the Apocalypse, will be released soon! 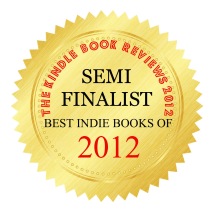 Shiny. Keep out of view of crows.

And here’s the silhouette of the spacelady who has managed to eek out a spot amongst the semifinalists. That gun looks dangerous.

One response to “MnS News”

This site uses Akismet to reduce spam. Learn how your comment data is processed.