It all started out of idle curiosity.

In the pilot episode of Knight Rider, was the pre-facelift Michael Long played by David Hasselhoff or another actor?

I was about 90% certain it was another actor, but memory is malleable and this is an important question. I had to know for sure.

Since nuking it from orbit wasn’t an option, I hopped onto the nearest local streaming service and found the pilot.

A two parter, and everyone knows how bad 80s television was. Would I be willing to endure nearly two hours of Vogon poetry-esque viewing in order to get my answer?

Clearly, no. Thankfully, to answer my question I would only need to watch the first couple of minutes.

I can confirm now that Michael Long/Michael Knight was played by a different actor for the pre-plastic surgery bits, one Larry (not Harry or Gerry!) Anderson.

(And the irony of using IMDB to look up his name for this post, and not thinking to do that earlier instead of actually watching, is not lost on me.)

I wonder if that actor was hoping for the series lead role, and if he was bummed to only get this entirely forgettable bit part instead. Is he at home now, in a fluffy recliner, watching YouTube footage of David Hasselhoff singing on the Berlin Wall, thinking bitterly, “That could have been me!”?

I like to think so. I mean, his career includes such post-Knight Rider highlights as “BMW Businessman” and “Tarlack Officer” in Star Trek:Insurrection.

On second thought, a glance at IMDB suggests he’s worked a lot more than The Hoff. Maybe it’s David sitting in the fluffy recliner, staring at the TV and shouting at Larry in that one episode of Castle.

(Let me just say, I have a newfound love of IMDB.)

Anyway, where was I?

That, plus after quitting about 30 minutes into the pilot, I realized that Knight Rider is the start of the end times. KITT is a precursor to, not self-driving cars, but the Cylons that will nearly wipe us out in the not so unforeseeable future.

I guess we should start replying to every Elon Musk tweet with, “As you wish.” *

* NOTE: Thanks to the thoughtful comment below, I have corrected an error in this post. I originally misquoted the Cylon catch phrase and said: I guess we should start replying to every Elon Musk tweet with, “As you command.” I apologize for the error and constructive criticism is always welcome.

Posted by ianmdudley on 14 September 2020 in Conspiracies Out To Get Me, Life

Tags: Anti-Christ, Battlestar Galactica, cylon, David Hasselhoff, End Times, Hoffmeister!, Intel Inside, KITT, Knight Rider, Larry Anderson, memory, Michael Knight, Remember that season of Knight Rider when they replaced Bonnie? Yeah me too. Glad they brought her back the following year., The Hoff, the reliability of memory, The sweeping car light even SOUNDS like a Cylon's!

It’s another writing blog meme! Jump before it hits yo- Too late.

So, like a bad case of the croup, there’s a writing blog hop making the rounds. And I caught it.

This particular round requires answers to four questions about writing. I’m not sure I have anything of value to say on the art of writing, or as I like to call it, ‘prosefaction,’ but rather than break the chain and have untold horrors befall me and my descendants, I’ll wing it.

Who was so generous as to push me onto this blog hop conveyor belt? Why none other than Kit Campbell. So send your complaints about this blog to her, thank you very much.

What am I working on?

Keeping a tenuous grip on my sanity. Oh, you mean writing-wise?

Keeping a tenuous grip on my sanity:

I’m editing Balloons of the Apocalypse, the next book in the Marlowe and the Spacewoman series, while holding a full-time job, dealing with toddlers when I get home from work, being awakened at the crack of dawn EVERY morning by said toddlers so I’m sleep deprived, trying to pull my weight in the whole marriage/relationship thing, and taking flight lessons.

Why did that come out ‘lesions’ when I first typed it? I may be just a wee bit utterly exhausted.

How does my work differ from others of its genre? 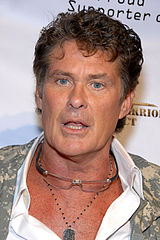 The stuff that dreams are NOT made of.
Image © Glenn Francis, http://www.PacificProDigital.com

Hmm. How is it different? I’d say the absurdist element, though that probably isn’t unique to my books. I built a world that makes you scratch your head and hopefully laugh, but my main characters don’t see it as anything but the world they live in and must navigate.

Oh, and I have an immobile character named House who I always imagine being voiced by Stephen Fry (and not Hugh Laurie, who despite starring in the medical drama House also appeared with Stephen Fry in a number of things, including Jeeves and Wooster). House is Jeeves, only without the ability to sap you with a cosh.

And in the Marlowe-verse, David Hasselhoff played Philip Marlowe in the movies.

Why do I write what I do?

Why do any of us write? To keep those effin’ muses at bay, of course. Once they deliver an idea to me, they pester me until I use it.

Jump up and down on my head.

Makes me yelp every time, which, given that the bastards are invisible, has caused no end of problems at work, during romantic moments ‘alone’ with the Missus, while passing through airport security, and during the bi-annual, court-order psych evaluations.

But once I’ve written it down, I have a few hours respite before they come up with what they think are brilliant new ideas.

It really sucks when the ideas are lame. They never see them as such.

If you’re reading something of mine and come across a passage that strikes you as particularly lacking, just remember: I thought it was lame too, but I had to put it in to stop the incessant badgering.

How does my writing process work?

Computer and fly swatter. Because though they may be invisible, those Muses are not incorporeal.

I used to pants it, but I’m experimenting with outlining now. I rarely stick with the outline all the way through, but it helps to have a nice, solid map of where I want to go and how to get there from where I am.

Of course, editing doesn’t have much outlining in it. I suspect I’d be doing it wrong if it did.

And there’s my contribution to the writing process.

Now, as I understand it, I’m supposed to give a few more writers the opportunity to wax poetic (or prosetic) on these questions. Kit’s already dodged this bullet, as she’s the one who tagged me, so I choose:

Lisa Eckstein (a madwoman with a box and some writing utensils)

Tamela Buhrke (a madwoman who happens to write)

Stephen King (not holding my breath on this one)

Posted by ianmdudley on 17 March 2014 in Marlowe and the Spacewoman, Writing

Tags: David Hasselhoff, editing, I finished my taxes yesterday and it's like a load lifted from my gonads!, Stephen King, writing process