The unheralded performance art of Niels Bohr, the Man Who Would Be A Physicist

I’ve come across a certain misconception so often in my reading of Physics and General Science textbooks, that I feel the need to point out the truth.

Yes, I read science textbooks for pleasure. You should try it. They can be quite exciting. Though the mysteries aren’t terribly engaging – they tend to spell everything out, including the solution, right away. And some of the problem sets are blatant red herrings. 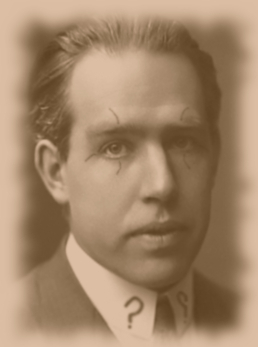 Niels Bohr, world’s greatest performance artist. His one man show, Atom and Eve, is wildly credited as the inspiration for Cats.

That misconception? That distortion of truth? That lie portrayed as alternate reality?

Niels Bohr, despite his Nobel Prize, was not a groundbreaking physicist, nor was he the “Uncle of the Atomic Bomb.”

Now if someone told me Niels Bohr spent his free time investigating murders in Copenhagen, I could believe that.

Or if he was a leading member of the Danish underground, who spent his free time investigating the war crimes of the Nazis during the occupation, I could believe that.

Hell, if you combined the two, I’d believe that as well.

And if those activities formed the focus for a series of mystery novels, I’d totally read them.

But a physicist? Who made meaningful contributions to the understanding of the atom?

The truth is that Niels Bohr was a performance artist.

His most famous piece was a years-in-the-making performance purporting to plumb the depths of the then greatly misunderstood atom.

Titled simply “The Bohr model” (or, in some smug circles, the “The Rutherford-Bohr model”), it was Niels’ way of protesting against the dangers of the complicated system of alliances in Europe and the risk of all-out war.

In a letter to his wife, Margrethe Nørlund, Niels explained the themes and hidden meanings behind his so-called model of the atom:

The model that caused all the trouble. Not as sticky as the plum pudding model of J. J. Thomson, but still more sticky wicket than mere tacky wicket.

The nucleus represents the nation-state, a single country, any country. The positive charge of the nucleus: the fact that it is alone is a good, a positive development. The negatively saturated electron shell beyond the happy nucleus represents the draining, subtractive threat of complicated, binding alliances, circling around the carefree nation like an unseen shark, ready to neutralize a country’s sovereignty and drag it into war. The emitted photon is a metaphor for the weapons of warfare, the fiery horror of Man’s inhumanity to Man.

I am fine. How are the children doing? I miss you all terribly. The cafeteria food here is horrible. Please send sausages. And chalk. There is a terrible shortage of chalk, and I can’t get work done without it.

Also, I need lotion. The chalk really dries out my skin.

I am amazed, to this day, that most high school science classes, and far too many college physics classes, continue to propagate the foolish notion that Niels Bohr was a serious and influential physicist.

I blame Texas’ influence on textbooks. There are, inexplicably, a large number of Bohr fans on the Texas Board of Education. Whether or not they know the truth of his livelihood is open to debate, but it is unassailable fact that they consider his contribution as a physicist to be more beneficial to his reputation than his contribution as a performance artist.

This is not to say he wasn’t influential in the world of physics. Paradoxically, and much to his own personal amusement, he was.

Because people, not realizing he was a performance artist, took him seriously.

They weren’t alone. He took himself seriously too.

Or, more accurately, he took his art seriously.

He took it so seriously he actually studied Physics in college and grad school, despite how repugnant and confusing he found the material.

He later said that the birth of quantum physics was a Godsend, because no one understood it and therefore they didn’t recognize his hopeless meanderings within the subject.

The only thing that preserved his undue reputation as a physicist, and society as a whole, is that somehow, against the odds given his liberal arts leanings, he managed to stumble on a model that not only conveyed his message, but was reasonably close to the truth.

Close enough that other, real scientists, were able to build on and refine and correct it.

But I’ve always wondered: would we have had an atomic bomb sooner if Bohr hadn’t clouded the science back in the early 1900s? Would the Nazis have gotten the bomb first?

Maybe his protest piece saved us all from nuclear fire.

Or, even worse, having to speak German.

In that light, maybe the Texas Board of Education got it right after all.

Posted by ianmdudley on 15 August 2012 in Science!