The Read an E-Book Week promo is for electronic books, so I have no
idea why Smashwords provides a banner with physical books in it.
Smashwords, man, Smashwords. Know what I mean?

Have you found my blog even fleetingly entertaining, but not enough to drop $2 on my Marlowe and the Spacewoman book, or a buck on my Marlowe-verse short story?

Well, lucky you, for the next week you can get the book risk free, with a 100% money back guarantee.

That is, free. On Smashwords. Click on the titles below to get your free copy (or, if you’re feeling adventurous, copies).

Posted by ianmdudley on 2 March 2014 in Marlowe and the Spacewoman, Writing

Are Books A Threat To Our Children, Or An Innovative New Food Source? 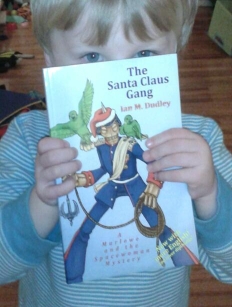 It’s a fun Xmas story and serves as a better-than-expected shield when fending off blows from siblings.

Kids do the damnedest things.

Especially when they can’t read.

Let’s face it, if you hand a book to a young enough kid, he or she will try to eat it (and sometimes succeed). Even if they aren’t hungry.

Which makes me wonder, if you can buy edible underwear, why has no one come out with an edible book?

This lack of fresh and healthy edible books is why I only buy my toddlers hardback books. They can try, but they aren’t getting those down. At least, not easy.

Sadly, that all changes once they discover the knife drawer. Damn you, Williams-Sonoma!

But the resilience of the format is what really makes me wish CreateSpace offered a hardback option.

The paperback proof of my latest offering, the Marlowe and the Spacewoman short story The Santa Claus Gang, arrived in the mail yesterday.

I’m pretty pleased with how it turned out (and have subsequently released the book for publication).

My kids seemed pretty excited too, until they discovered there were no pictures inside.

But if nothing else, they deemed the cover a huge success, which is more than can be said about their views of my previous book, Marlowe and the Spacewoman. They were very unimpressed with that cover. Perhaps because of the bar of soap that features so prominently on it.

There, that takes care of the shameless plug for my new book. Back to the topic at hand: kids and books.

The other night my kids barricaded themselves in their bedroom, pushed the toy box over to the door, and started removing books from the hanging shelves on said door.

Not every book, mind you. One kiddo would pull a book out and show it to the other kiddo, who would judge it either ‘scary’ or ‘not scary’.

The scary books were handed down and dumped into a basket in the corner of the room furthest from the beds, behind a dresser.

“Why are you putting the books there?” I asked.

“They’re scary books,” Kiddo #2 answered solemnly. “We don’t want them to get us.”

I’m not sure exactly what the perceived threat was from these books, but they were definitely taking it seriously.

Now I can understand my deranged foray into children’s books, Kleencut, ending up exiled to the ‘Danger Zone’ – after all, it’s a terrible, 1-star review freebie on Amazon that really shouldn’t be read to children no matter how much they clamor for it.

But the Berenstain Bears?

Apparently, the Berenstain Bears book Safe and Sound! is particularly scary, because it was at the bottom of the pile.

I would have given them ‘boring’, because man it does drag, but scary?

I guess my kids feel safer knowing I am more likely to be injured as I contort myself in an attempt to get at that book so I can read it to them.

And that, in itself, is pretty damn scary.

Posted by ianmdudley on 7 December 2012 in Marlowe and the Spacewoman, Mystery, Writing

Tags: Amazon, Blake Shelton naked underneath his Santa Claus costume, book cover art, books, children, cover release, createspace, ebook, edible books, kids, kindle, Kleencut, paper book, Philistines, Prussian Robot Death Squad Commandos, scary books, Smashwords, The Santa Claus Gang, what kind of a screwup parent are you that your kids are trying to induce book-related injuries on you?, Why not feed the children's minds and tummies at the same time with a tasty book?, Williams-Sonoma, Williams-Sonoma is singlehandedly responsible for the destruction of untold number of books at the hands of toddlers

Benedict Cumberbatch (not) naked – you people searching for those images need to get a life. Seriously. His voice, however? To die for…

Whenever I have a bad day, I try to remember my cousin Rupert.

In addition to being nerdy, desperately lonely, and in high school, he has parents who felt it appropriate to name him Rupert.

I will not reveal his middle name, except to say it starts with a ‘T’ and ends with an ‘iberius.’

Parents can be cruel idiots. Just like the jocks who beat Rupert up. A lot.

And it isn’t just the jocks whaling on him.

(Girls are cruel too, and holy crap, they fight dirty.)

Six months ago, things for Rupert took a turn for the worst. The star quarterback on the school’s football team convinced a bunch of linebackers that it would be a big boost to school spirit if they threw Rupert into the stadium during a game.

Rupert landed on his head.  He was in a coma for a week.

When he woke up, Rupert had undergone a complete transformation.

He went from his slightly nasally, West Coast dialect to having the accent of a man doing a presentable impression of Benedict Cumberbatch.

This did little for his health and well-being around the jocks who weren’t awaiting trial for felony assault and battery. Those footballers still at liberty had it in for him the moment the team’s best players were suspended and brought up on charges.

The accent was just a gift as far as they were concerned.

And who can blame them? First name Rupert, ponce British accent – even I felt an overwhelming urge to shove my fist into his gob-hole when I visited him at the hospital.

On the other hand, the accent has made him very popular with the ladies.

Which is a pity, since he’s gay.

I have to wonder what kind of impotent force in the Universe would take a young man, ensure his life involves beatings, humiliations, and hospitalizations, and then repays him for these indignities by making him irresistible to the gender he has absolutely no interest in.

I was thinking about this today as I surveyed my lawn and quietly wept.

I mowed it this morning. I hate mowing, as I’ve mentioned here before. But after mowing it, with the sun beating down, I spent forty-five minutes creeping up and down the length of the lawn, on hands and knees, carrying a large plastic bag and dumping every single dog turd I came across into that bag.

I don’t do this very often. The bag was very heavy when I was done.

I wanted to make the lawn safe for my kids to play on.

The same kids who, a few days earlier, had knocked a bunch of loquats out of the loquat tree with a broom.

Loquats the dog ate as I was cleaning up all the turds.

The dog that got the runs because he ate so many loquats.

And back to the kids who chased the dog with the runs because of the loquats up and down, back and forth across the lawn.

After I cleaned up all the turds.

A pointless, demeaning exercise in futility that makes me want to shove a gun in my mouth and spray my brains all over that damned dog.

This is exactly how I feel every time I try to use Smashwords to publish one of my books.

I’d been hoping to make an announcement here for about a month and a half about a free book, but in order to make it free on Amazon and Barnes and Noble, I have to publish it through Smashwords and wait for it to go through the Premium Distribution channel.

It takes about three weeks for Smashwords to figure out there’s a problem with the aspect ratio. This in itself is very frustrating.

The cover must be a vertical rectangle with a height > (width +100).

Perhaps they employ a form of non-Euclidean geometry…

So imagine my surprise when, three weeks later, I got the same error.

I guess my mistake was thinking ‘high’ was equivalent to ‘height.’ Boy, is my face red.

I’ve cleaned the gun. I’ve got the dog chained to a post within what I calculate will be the spray zone. Now I just have to wait another three weeks to see what additional nonsense Smashwords will sprew at me to trigger the suicidal final gesture.

I have to admit to a certain amount of curiosity. I’m hoping for some new form of obscene illogic, rather than the same old same old.

But mostly I just want to mail all my lawn scrapings to Smashwords’ corporate office.

Kleencut (FREE! Yes, I’ve mentioned it in the ads, but wanted to do an actual, dedicated blog post about it for weeks now. Thanks a lot, Smashwords, you box of bastards!):

Posted by ianmdudley on 29 May 2012 in Conspiracies Out To Get Me, Life, Other Blogs, Technopocalypse